Kiwix is a special software. Special because it's difficult to define:

So far, all this was maintained by hand, the ZIM files are created from a complex procedure of scripts and mirror setups, the releases are created manually on all platforms, etc.

You got it, it's difficult to keep up with improving the software, fixing bugs, generating new content ZIM files, building and testing the software on all platforms.

Our first step into the right direction was getting the translations done on TranslateWiki and it got us to ship Kiwix now with 80+ languages.

Thanks to sponsorship by Wikimedia CH, we decided to first tackle the build problem as it's the most annoying.

Kiwix releases on the following:

Knowing that only reg has a Mac, that the Windows setup for building Kiwix is complicated and that both Kelson and reg are using Linux, testing and distributing new versions of the code is very difficult.

This is not a unique problem ; most large multi platform softwares faces the same issue and we did nothing but imitate them: we deployed a build farm.

The solution looks like the following schema: a bunch of Virtualbox VM, a Qemu one for arm, buildbot on all of them. 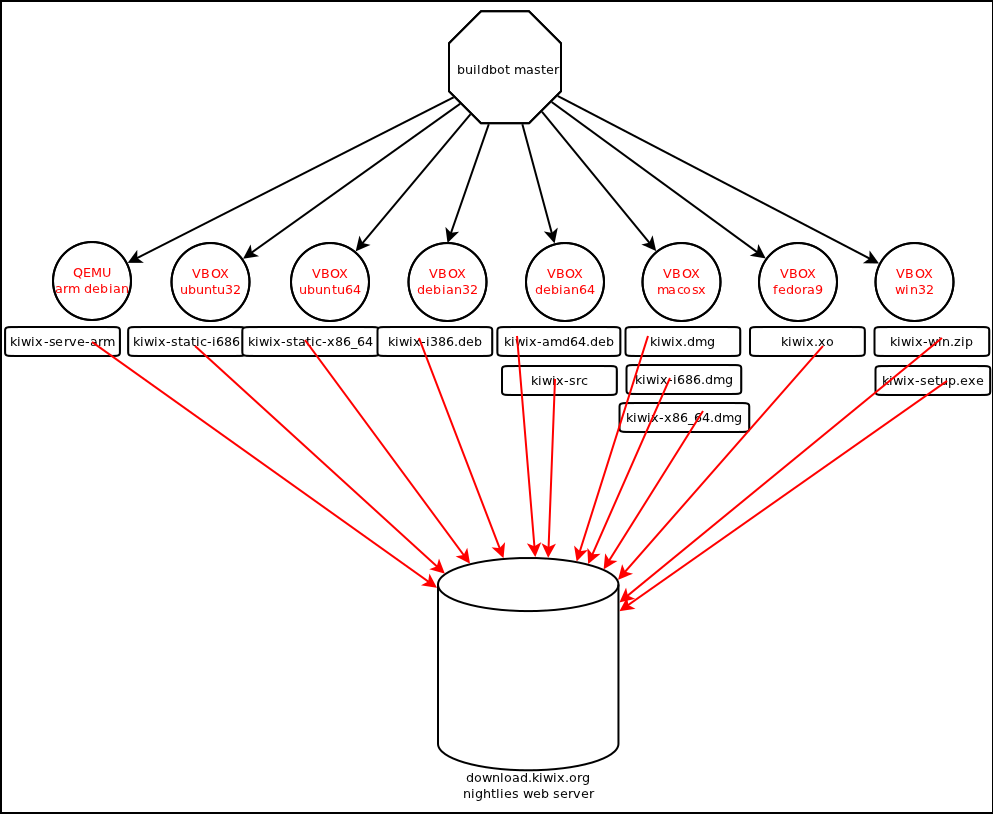 As you can see, the builbot master controls all the slaves which creates their own builds and sends them to the Web server's repository.

A compile farm is a set of servers ; each building a platform or target of the software. To manage those, a large number of software exist.

After some research, we chose Buildbot because:

The deal-maker was really the tutorial on the website wich allowed us to imagine the required steps without to actually get our hands dirty.

Builbot is divided into two softwares:

Kiwix already rent a very powerful server in a data center for serving downloads. We used it to hold everything.

All the build slaves (except for the arm target which is not supported by VBox) are VirtualBox Virtual Machines (VM):

All the VMs were installed through VRDP (VNC-like protocol) until the network is configured and ssh access is enabled.

QEmu was required to get an armel VM. We used aurel32's debian images.

Note: In order to ease the SSH connexion, halt and start of the VMs, we wrote a wrapper script around VirtualBox.

Configuring buildbot is pretty straightforward once you know what you want to do. Configuration is composed of the following components:

The hard part is defining the builders as this is where you indicate how to retrieve source code, launch your configure script, compile, and tranfer your build somewhere else.

Take a look at ours as an example: master.cfg

We don't use any advanced feature so it's easy to understand. We chose:

Buildbot handles the transfer of files between master and slave.

Although it's simple, it takes a lot of tweaks and tests (fortunately it's easy) to get the configuration as wished, you need to have a proper and documented build mechanism for all your targets otherwise you'll probably go crazy. We completed a complete rewrite of our autotools Makefiles for all platforms __before__ we setup buildbot. It sounds dumb but it's worth noticing.

Things you should know

If you intend to reproduce, here's a few things we've learned and want to share.