From Kiwix
< Blog
Jump to navigation Jump to search

I have released the first beta of Kiwix 0.9. Binaries for Win32, MacOSX, Ubuntu (PPA) are available, like the source code. You may download them from Sourceforge or Kiwix Web site.

This took us almost 9 months to prepare this release... what is really a long time between two dev. releases. But a lot of things were done like: 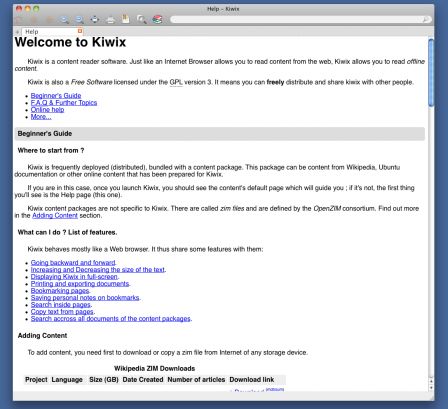 Behind the scene, we newly integrate:

... and revamped the whole set of compilation scripts.

Here is the CHANGELOG:

The most important, we have done the mandatory work to setup a decentralized solution to spread/share content (ZIM Files). We still do not use all the power offered by the Metalink tech... but we will (we still need new mirrors, please contact us if you have one).

As a result almost all features we wanted to introduce with 0.9 are now there. We plan to use the next beta and RC releases to fix bugs (I'm sure we will also detect a few regressions) and polish the software. 0.9 Final release should be there for Christmas in the worth case.

More people than usual were involved. I want especially to thank: